THE HISTORY OF THE
ST. GOTTHARD

The St. Gotthard, the most mitical and historical mountain concerning the communication routes in Switzerland.

During the Roman era, the Gotthard Pass could only be crossed by foot or with mules. Despite it being the shortest transit way (North-South), travellers rather chose other ways because of its impracticability. In the 13th century and thanks to their remarkable technical skills, the Walser built the first bridge in the Schöllenen gorge, known as the devil’s bridge, and the Twärrenbrücke, to cross the Reuss River. With the realization of these constructions, for the first time the pass gained European importance, a determining turning point for the destiny of the populations of the two mountain faces.

The Gotthard Pass is quoted in the Annales Stradenses (13th century), a guide for pilgrims who wanted to reach Rome or the Holy Land. In 1230 the chapel dedicated to St. Gotthard was consacrated and the hospice lead by the Humiliati order was built: the latter allow completed the assistance network for travellers. In 1595 a stone arch bridge was built in the Schöllenen gorge. The road was essentially still a mule track that only allowed for the transportation of goods by mule, up to the beginning of the 19th century.

The Gotthard Pass is known as the “people’s route”, a name that fittingly illustrates its function in the past, namely that of comfortable route for people but a less comfortable one for goods.

In 1708 the road was improved considerably and in 1775 we find documentation of the first carriage crossing, realized by the English geologist Greville. In 1799, the Russian army led by Marshal Aleksandr Vasil’evič Suvorov crossed the pass and fought against the French, in the Reuss gorges.

The situation only improved remarkably in the 19th century with, on the one hand, the construction of a real surfaced road – five meters wide throughout the whole route – and, on the other hand, a  new bridge in the devil’s gorge, which was completed in the 1830s.

In 1850 a train trip from Milan to Basel required about 50 hours, by train from Milan and Camerlata and by boat between Flüelen and Lucerne. 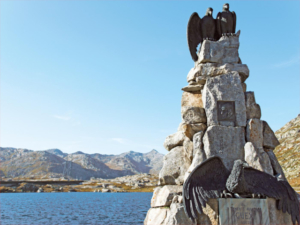 On the Gotthard Pass one can admire the monument dedicated to the famous Swiss aviator Guex, who died for the motherland in the Alpine region of the Gotthard. The work was realized in 1928 by Fausto Agnelli. 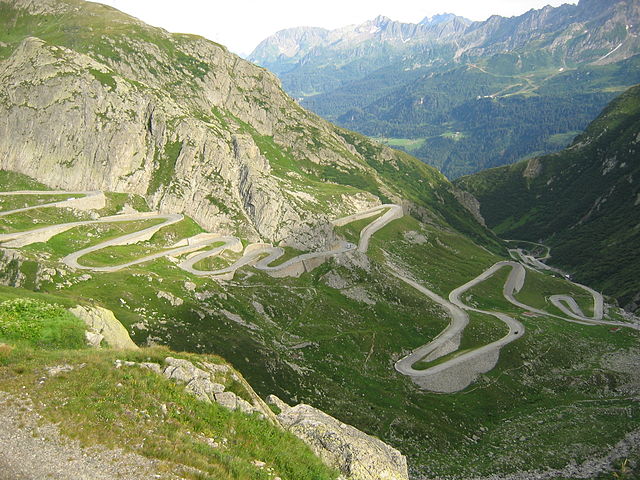 The Tremola road, paved in granite, is considered Switzerland’s longest historical road monument. It is situated on the Southern side and connects Airolo to the Gotthard Pass through numerous curves. Visitors may take a trip by coach, as in the first half of the 19th century, along this fascinating and tortuous road. The old road is still practicable. 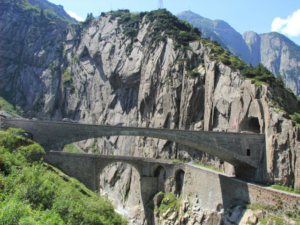 The Devil’s bridge in the Schöllenen gorges, on the Northern side, is a historical and legendary place as it was an obligatory passage for all travellers and scene of furious battles. The bridge was built between 1828 and 1830 by Swiss engineer Karl Emanuel Müller (1804-1869) and, today, one can only see the remains of the bridge’s original foundations. The new Devil’s bridge was built between 1955 and 1956.

In 1799 the Devil’s bridge was scene of a furious battle in which the Russians, led by General Suvorov, defeated the French. The Monument to Suvarov, chiseled into the gorge’s rock in 1899, commemorates the dead Russian soldiers. In 2009, during a State visit, Russian President Dimitri Medvedev visited the historical place.

since 1972
The Pro St. Gotthard Foundation was set up for the Preservation of the National Patrimony and by the Swiss League for the Protection of Nature with the aim of “preserving the environment of the Gotthard Pass and of the Hospice, national testimony of our history and expression of Swiss liberty and independence”.

The Club supports the Foundation Pro San Gottardo, promotes the Pass as a meeting place and maintain the contacts between members.
It also makes financial contributions to the Foundation, organises social and cultural events and meets once a year on the Gotthard.